A journey back in time 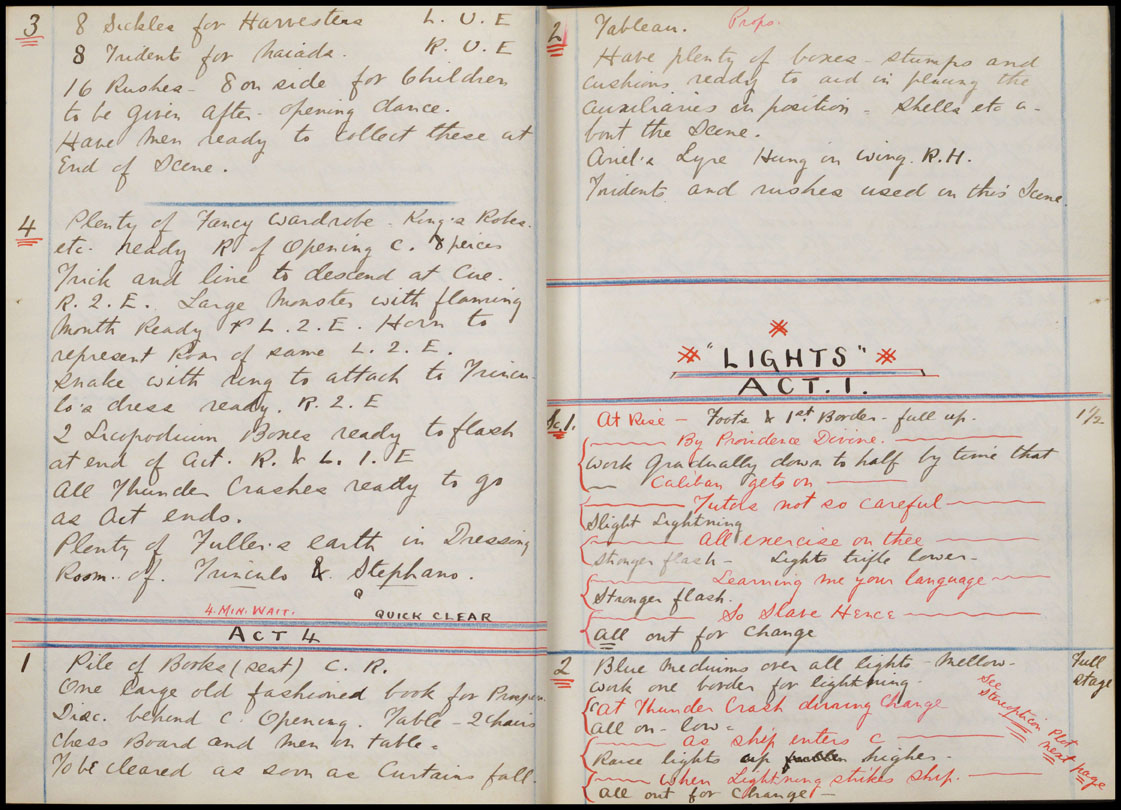 My favourite prompt book - and there are so many to choose from - is this little gem created by Louis Racine Grisel, an actor and stage-manager at J. H. McVicker's Theatre in Chicago during the 1880s. McVicker's production of The Tempest opened on 24 June 1889. Grisel's prompt book is one of the most detailed and thorough prompt books in the collection, jam-packed with fascinating facts about the production.

He starts with costume. We can see that Ariel wore a "white Grecian shirt" and "silver wings", and that Caliban had to don a bizarre "webbing joining arms and body - like a Bat."

Then scenery for every act and scene is described in meticulous detail... "a working ship, into which 10 people can be carried", "a working trick table" and "an illuminated waterfall" are just some of the elements that were designed and built for this production.

Next comes the 'Fly Plot'. The 'fly system' is the arrangement of pulleys, ropes and hoists that are rigged up behind the scenes in a theatre, allowing the stage hands to manouvre sets, lights and scenery. Grisel's 'Fly Plot' is a description of every set change that's required throughout the performance, along with specific instructions to the stage hands.

This is followed by lists of all the 'Properties' needed for each scene. Grisel lists an "electric wand for Prospero", "a large quantity of shells to strew about the stage", and "plenty of Fuller's earth in Dressing Room of Trinculo and Stephano". Also included in the 'properties' section are the items required to make sound effects, such as sheets of metal (to be shaken to make the sound of thunder) and buckets of water (to create the sound of splashing).

Then Grisel moves on to lighting. He has handwritten every lighting instruction for the stereopticon, as well as the line that is spoken just before the action needs to be taken, so the lighting hand knows his cues.

The 'Auxiliary Plot' details the requirements for extras, and when they should appear on stage. We see that 16 children were drafted in to play fairies, and two boys were cast as 'grotesques'.

The timings for every act and scene are then listed. 11 minutes for the overture, 10 minutes for Act 1, Scene 1, and so on all the way through the play.

Only after all this information do we get to the text of the play itself. As was often the custom with prompt books, a printed copy of the play (often from an earlier production) is cut up and pasted into the prompt book, allowing lots of blank space for notes to be written. And Grisel loves notes. He describes every single stage direction in specific detail, even making little doodles and sketches to get his point across.

Grisel's prompt book was designed to be the bible of the production, to which every member of the theatre company could refer for clear instructions on what they had to do and when. Months of planning and rehearsal would have gone into creating this book, with revision after revision taking place until Grisel had a performance he was happy with. The meticulousness and precision is truly amazing, and just goes to show the effort and time that was (and still is!) put into theatrical productions. The beauty of having Grisel's copious notes is that we can recreate, in our minds at least, the production of 1889, and put ourselves in the place of the nineteenth century Chicago audience that would have watched all these intricate descriptions played out on stage. That's pretty special. 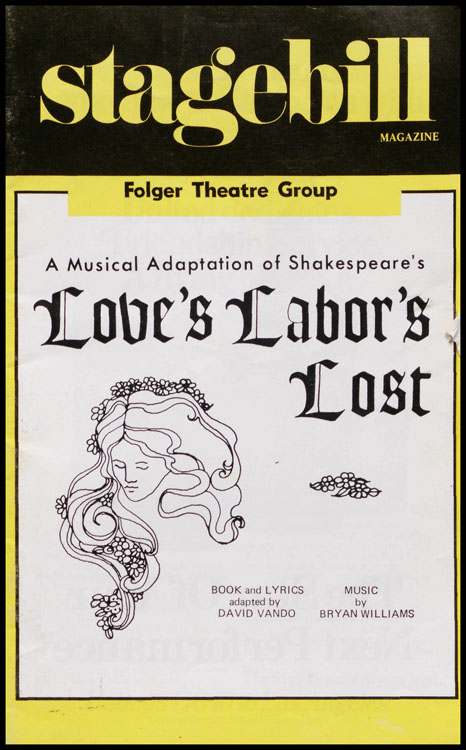 This prompt book was used for a musical adaptation of Shakespeare’s ‘Loves Labours Lost’, performed by the Folger Theatre Group during the 1973-1974 season. As well as the prompt book itself, this document includes a programme for the production, a company list, music scores and stage manager reports for each performance given between 23rd April and 26th May 1974.

The stage manager’s prompt book has detailed annotations for lighting and music cues, cuts, sound effects and props, as well as instructions regarding how the actors are to move across the stage (blocking). For example, “King: Bored. X’s D.R. to Moth + leaf him u. to below R. pillar”, “Cost. Plays w. stick” and “Arm x’s U. to Moth; Moth sits 3rd step. Arm lays w. head in Moth’s lap to R. of Moth.”

The headers for each stage manager’s report cover the same information, capturing data about the date and time of performance, the weather, curtain time, running time and end of show time. They also include sections for the manager to record details about actors or staff who are late for calls, technical mistakes in performances and unauthorized changes in performances.

On the 5th May, for example, “Amy Heyman was 1 hour and 10 minutes late for call, due to no electricity in her building and she did not wake up until Nick Meyers, A.S.M, called her at ½ hour.” On the 3rd May the stage manager recorded the following technical mistake: “The House Lights were called late for the opening of the show, called as the minstrel figure appeared fully in view instead of just his feet.” While between the 12th and 16th May, all of the unauthorised changes recorded refer to the actor John Butz, who began making amendments which some of the other actors felt were “out of place in the show; some overdone and campy things”.

The overall ‘Comments’ sections make for interesting and sometimes very entertaining reading too. The stage manager uses this section to review specific actor performances, record mistakes with the script and costume and prop issues. For example, on the 24th April “Frank Coppola flubbed lines on page.36”, on the 24th May “Mark Robinson kicked a cardboard piece out of the S.L. platform during the sword fight … it looked very tacky, he must realise the set is made of cardboard and not 2x4’s” and on the 26th May “Dumaine forgot to put his belt back on after he took it off to change for the Muskovites. He looked like a sack of blue potatoes.”

The reports also record the audience reactions to performances. On the 18th May, the stage manager writes that there was “An excellent house, applauded everything”, while on the 25th there was “A very mediocre audience as far as responding to the show.” The manager also records that on the 9th May, the show was watched by a disruptive teenage audience and that “it was extremely distracting, as a group of 5 kids came back into the theatre after playing around in the rest room for ½ hour” and that there were “4 kids who continued to reach up onto the stage picking up sequins and bits of Berown’s torn letter.”

However, it was not only unruly teenagers that distracted the actors. April 28th was Press Night, and the manager reports that “the cast was obviously nervous … they made several small nervous errors; tripping, dropping props etc.” While on the 30th April, it was a surprise applause from the audience which caused the actors to miss the music cues and subsequently sing and speak their lines at the wrong time.

While the prompt book annotations give an insight into how the stage manager wanted the play to be performed, the reports he wrote at the end of each performance give a fascinating insight into the ways in which things do not always run to plan and the types of problems that can arise during a live performance.

Catherine and Petruchio, Garrick's Taming of the Shrew 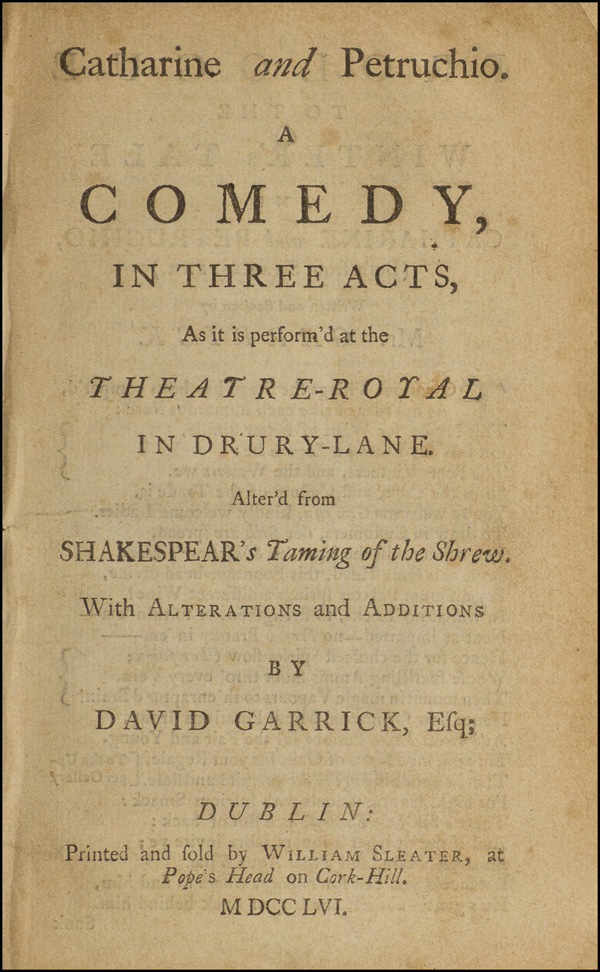 In 1754, the successful actor and director David Garrick turned his pen to Shakespeare’s well-loved play The Taming of the Shrew. He was not the first to do so, John Lacy having penned Sauny the Scott, or The Taming of the Shrew in the late 1660s, and A Cure for a Scold by James Wordale having been performed at Drury Lane in 1735. However, Garrick’s piece Catharine and Petruchio enjoyed success far surpassing previous adaptations, and this version was exclusively and extensively performed for the rest of the 18th century.

Shrew Ad 11, Catherine and Petruchio, a comedy in three acts  is an early publication of Garrick’s adaptation, as it was performed at the Theatre Royal Drury Lane, London, and is an example of when Garrick paired the adaptation with his shortening of The Winter’s Tale. This pairing was due to Garrick shortening the play from five acts to three, which he mentions in the prologue “The Five long Acts, from which our three are taken”. A large change cut in the omission of the Christopher Sly scene, an induction which sets The Taming of the Shrew up as a play within a play. Garrick further reduces the piece by removing the sub plot line of the wooing of Bianca by her three suitors. Instead, she is already married to Hortensio when the action begins.

Another key alteration comes with Garrick’s attempts to justify the violent behaviour of the characters. His Petruchio claims that his abusive ‘taming’ was only temporary, declaring: “Kiss me, my Kate; and since thou art become so prudent. Kind and a dutiful Wife, Petruchio here shall doff the lordly husband; An honest Mask, which I throw off with Pleasure. Far hence all Rudeness, Wilfulness and Noise, And be our future Lives one gentle Stream Of mutual Love, Compliance and Regard”.

Shrew Ad 10 refers to the play by its original title, but takes the text from Garrick’s adaptation. A prompter’s copy printed in 1786, it shows even more cuts to Garrick’s already shortened text. Such performances continued throughout the 18th century and into the early 1800s as the popularity of Catherine and Petruchio grew. 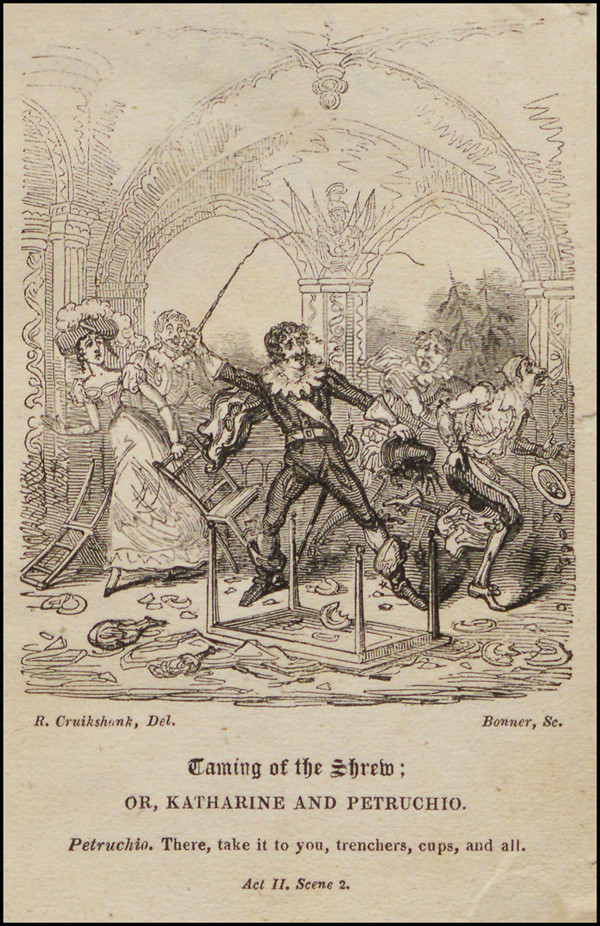 Shrew Ad 5 is a particularly interesting Catherine and Petruchio document. A fully developed prompt book filled with cuts, calls, scenic indications and stage business, it also includes additions, showing further developments on the 1754 Garrick adaptation. The playbills inside advertise performances in New York in the 1850s, demonstrating the international success of the adapted play.

In fact, in the introductory remarks of Shrew 10 written by Augustin Daly, he states that he can find no record of The Taming of the Shrew being performed at a New York theatre before the performances of Garrick's Catharine and Petruchio were brought there. This copy of the play, arranged by Augustin Daly, was to be the first performance in a New York theatre of the true play, taking place in 1887.

It had not been until 1844 that The Taming of The Shrew in its original form returned to the London stage. Performed at the Haymarket Theatre, Shrew 2 restored the Christopher Sly induction, as well as Bianca’s plot. However this performance did not manage to sway audiences back to The Taming of the Shrew and away from Catherine and Petruchio. This was not achieved until Samuel Phelps’s 1856 production at the Sadler’s Wells Theatre, recorded in Shrew 6. Although this piece included the Christopher Sly induction and the wooing of Bianca, it has heavy cuts to the last scene, ending, like Garrick’s production, on the word “obey”.

The impact that David Garrick’s adaptation had on restoring the popularity of this often controversial comedy is indisputable. He remains one of the most influential actors, directors and writers in theatre history.

Compare these texts using our Comparing the Prompt Books feature.